We started on Thursday afternoon and drove a long way. Near Greenfield, Georgia we entered some really bad traffic. It was because of construction. However, it turned out that the construction was not even going!!! The afternoon suddenly felt blazing, dizzying, dazing hot. Me and my brother started just jibber-jabbering away. Mom told us to be quiet, and we stopped. After nearly 1 hour, we crossed the South Carolina border. In South Carolina, one of the roadside attractions we saw was the big peach.

Again after a few more hours, we crossed the North Carolina border and the night had fall. Since we were driving in forest areas, it was quite dark outside.  We couldn’t see anything. Suddenly, a bright circle appeared. What in the world? Mom asked us, “Is that a moon?” I couldn’t tell. But suddenly my brother said,  in all of the choices in the sky and quite out of box, “It may be a Burger King sign.” We got closer and it actually was a really Burger King! This little joke gave us the energy we needed to survive through out the long night. We finally reached Richmond and hit the hay. Whew… we were exhausted!

Let me give out a little bit background. We used to live in Richmond,VA before moving to Atlanta. Actually myself and my brother were born in Richmond. I felt right back at home. 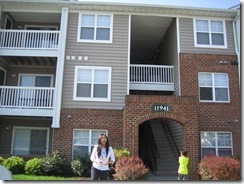 We drove around and met some old friends. It is quite a great feeling that nothing has really changed. After lunch, we then drove to Washington. It just a short 1 hour drive. We immediately start walking around the National Mall. We then had a tour in the the U.S. Bureau of Engraving and Printing. This is where the paper bills are printed. (there is only 2 places they print money. Fort Worth, Texas and here in DC.) Unfortunately, photography is prohibited so we cannot show anything. The highlight was a plaque on the wall. It said: Just think how I feel. I just printed my lifetime salary in a few minutes.

In the morning, we headed out to the Library of Congress and looked around. It is such a beautiful architecture! 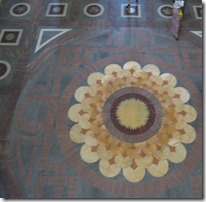 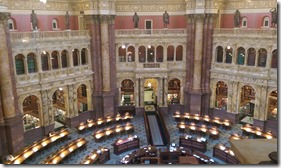 We explored more exhibits and and enjoyed the ambience.

Then we took a look at the National Archives, where the Charters of Freedom are located. Here, photography is also prohibited…

The movie National Treasure was featuring the National Archives where they try to break in and see the Declaration of Independence for clues to treasure. In fact, Washington, DC is a great city of connections to countless movies.

This was an amazing day of books and documents.

We headed to the Smithsonian Castle for our behind-the-scenes tour.

Planning of the Smithsonian Castle

A china cabinet (used to be a upright piano) owned by James Madison.

Holding a replica of the package that transported the Hope Diamond

After the tour, we headed across the street to the Natural History Museum. There was a lot of amazing things. Here are some: 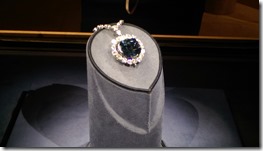 A pure aquamarine column (looks like Elsa’s creation, doesn’t it?)

A Tyrannosaurus Rex(they are creating a new Fossil Hall)

A split totem pole and its stories

We then went to the National Air and Space Museum. There was lots of antique planes and aircraft.

The Spirit of St. Louis (lucky to get a close up look)

Don’t you see these things have a connection? Yes, to the movie The Night at the Museum and its sequels!!!! The second one was based on Smithsonian museums.

We then headed to the Udvar-Hazy Center next to Dulls Airport. It is a little bit far away from DC so it took some driving. We definitely want to go because now it is the home of space shuttle Discovery!

Back to 2010, we actually went down to Florida and watched its launch – STS-131. The launch was the last night launch of space shuttle program and the second-to-last launch of Discovery! Here is the HD video of STS-131 launch. It was quite amazing.

This center is just a big hangar. There was also a lot of other planes.

This one had a lot of flags on it.

Concord, the first and only supersonic passenger airplane.

Enola Gay is a B-29 Super fortress and is the bomber to drop the first atomic bomb at Hiroshima, Japan. The bomber dropped the second atomic bomb at Nagasaki, Japan, Bockscar, is in the National Air Force Museum at Dayton, Ohio.

We had dinner at a Vietnamese restaurant and then headed back to the hotel. We visited many museums and walked quite a bit.

We headed to our last attraction, the Washington Monument. However, due to possible traffic, we took DC Metro. However, DC Metro also had problems! Because some fire department activities, we have to take different route and delayed. Luckily, we did not miss our monument tour.

We waited for a few minutes and headed to the elevator and got to the top.

The view was amazing!

East look, museum are close by. But cannot see the Capital clearly due to the weather.

North view. We can see the White House and the busy city clearly.

West side. The Lincoln memorial and reflection pool looks great. We also can see the Pentagon in distance.

South angle. The Tidal pool and Jefferson memorial are beautiful. Should come here during Sakura season though.

There are several exhibits showing the structure and source of stones of the monument.

When we came back down, the elevator slowed down and showed us inside of the monument.There are stones from many states. It was pretty cool!

Before we finish our DC trip, the last thing we did was walking around the White House.

Finally, we headed back home! It was another long drive and we even got some traffics and thunderstorms. Anyway, we arrived home safely around midnight.

One thought on “Washington D.C”